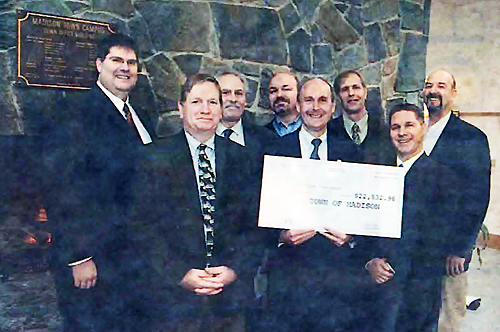 First Selectman Al Goldberg and Superintendent of Schools David Klein recently accepted a check for $22,000 from the Connecticut Energy Efficiency fund (CEEF) and its gas incentive program. The check rewards the town for installing a high efficiency boiler at Island Avenue School.

The program, administered through Southern Connecticut Gas (SNG) by Northeast Utilities (NU), provides incentive payments to customers to encourage them to select systems that will reduce overall gas consumption.

The town recently chose to buy a more expensive system with high efficiency ratings over a lower cost system that was less efficient for Island Avenue School.

"The incentive program from SCG made the choice a win-win for Madison," said Goldberg, who estimates that the higher efficiency system will save more than 150,000 cubic feet of natural gas per year. "Towns often want to make the right choice for the long haul and programs like these make long-term choices much easier to explain to taxpayers."

Madison is also planning to take advantage of CL&P programs in the future. The Connecticut Retro-commission (RCx) program has qualified Madison to receive program services in 2009 worth more than $10,000.

"This CEEF program has been extremely helpful for our schools," Klein said. "We have fundamentally sound school buildings with good control systems and this program will allow us to give them the tune-up they need to optimize their energy use."

The program also pays for in-depth energy efficiency surveys in large buildings and provides recommendations for reducing energy consumption without replacing the existing systems. Through this CEEF program and engineering support from CL&P, Madison will be able to investigate and improve energy use at the town's three largest school buildings.

All these steps are a part of a coordinated effort between the town and the schools, aided by the town's Energy Committee, Goldberg said. Wayne Goldsmith, vice president of Funk Boiler Works, the installing contractor, gave the town and Director of Facilities William McMinn credit for understanding the long-term benefits of a properly designed and installed boiler.

(Photo)
Town officials met with representatives from Southern Connecticut Gas Company last week to accept a $22,000 "check" from the company. The reimbursement is the result of a decision to install a new, high efficiency boiler at Island Avenue School. Pictured here at the brief ceremony are, from left, front row, Director of Facilities William McMinn, First Selectman Al Goldberg, and Superintendent of Schools David Klein. In the back row, from left are design engineer Christopher Nystron, Thomas MacDonald of the town's Energy Committee, contractor Wayne Goldsmith, and Michael Smalec and John Maziarz, both from the gas company. Photo provided by Southern Connecticut Gas. 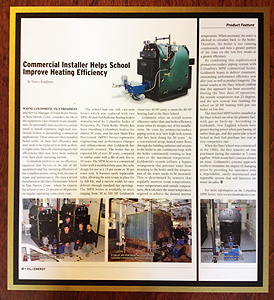 WAYNE GOLDSMITH, VICE President and Service Manager of Funk Boiler Works in West Haven, Connecticut, considers the life of the equipment a key element in any installation. He personally does not favor a current trend to install expensive, high-tech residential boilers in demanding commercial applications. These units are often installed based solely on their fuel efficiency and, may need to be replaced in as little as three to eight years, basically eliminating any fuel efficiencies that may have been realized over their short operating lifetime, Goldsmith prefers to use an efficiency equation that factors in the life of the equipment and the operating efficiency of the complete system, along with the ease of repair and maintenance. He cites a recent installation at the Hays Elementary School in East Haven, Conn. where he expects the school to save 25 percent to 40 percent on regular operating costs every rear.

The school had one old cast-iron boiler which was replaced with two MPH-4O dual-fuel hydronic heating boilers manufactured by Columbia Boiler of Pottstown , Pa. Funk Boiler Works has been installing Columbia’s boilers for almost 50 years, and the new Multi-Pass Horizontal (MPH) Series represents engineering and performance changes and enhancements that Goldsmith has anxiously awaited. The boiler has an expected life of over 20 years, compared to similar units with a life of only five to 10 years. 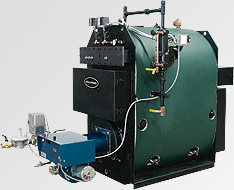 The MPH Series is a commercial boiler with a modified three-pass, fire-tube design for use as a 15-psi steam or 30-psi water unit. It features easily replaceable tubes, allowing the unit to stay in place for
its full life, and a narrow width for easy delivery through standard-size openings. The MPH Series is available in sizes ranging from 30 to 100 HP. Goldsmith chose two HP units to meet the HP heating load at the Hays School.

Goldsmith relies on overall system efficiency alone when he designs his primary/secondary piping system as a “new high tech system that he’s been doing for 30 years.” In a conventional setup, heated water flows through the building radiation and returns to the boiler in one continuous loop, with the boiler continuously running to heat water to the maximum temperature. Goldsmith’s system utilizes a bypass arrangement that prevents water from returning to the boiler until the temperature of the water needs to be increased. This is determined by sensors that regularly monitor room temperatures, water temperatures and outside temperatures, then calculate the water temperature required to achieve the desired interior temperature. When necessary, the water is allowed to circulate back to the boiler. Therefore, the boiler is not running continuously, and runs a greater portion of the time on the low-fire mode at a greater efficiency. 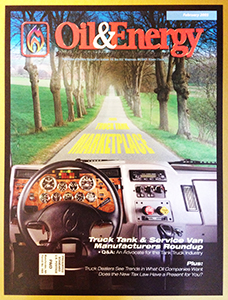 By combining this sophisticated primary/secondary piping system with Columbia’s MPH commercial boiler, Goldsmith hopes to deliver consistent, outstanding performance efficiency year after year, as well as product longevity. The initial results at hays School confirm that this approach has been successful. During the first days of operation, the outside temperature was 23 degrees, and the new system was running the school on 20 HP, heating with just one boiler on low-fire.
The dual –fuel MPH boilers installed at the Hays School use oil as the primary fuel, with gas as backup. According to Goldsmith, New England schools have greater buying power when purchasing oil rather than gas, and this particular school locked in their fuel purchase last year at a very competitive rate.

When the Hays School was first constructed in the 1960s, the first season’s oil was purchased during the summer at 3 cents a gallon. While actual fuel costs are always an issue, Goldsmith’s systems approach works to minimize the impact of changing prices by providing his customers with a dependable, easily maintained and repairable system that will function for many decades.

Here is a list of our experience with similar types of work:

Knights of Columbus – Boiler replacement design / build for one of the largest buildings in New Haven.
Paul Bello

Redstone Manor – Steam boiler replacement and design / build. Property has over 10 million BTUs and has been converted from oil to gas oil, which also includes a domestic water system. This job was finished in the fall of 2007.
George Passander